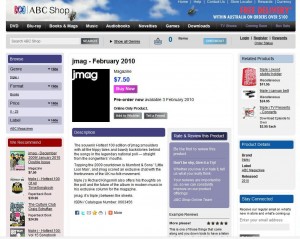 I’m a little bit sad that I saw this. Australia day is always about listening all day to find out what hits number one (then being outraged when it isn’t a song you like, having said that I like this song)

BTW i take no credit for the image or finding the leak, I am just sharing it, original at http://i49.tinypic.com/ab2zrk.jpg

Since my migration to Windows 7 there have still been a few things missing that would be nice to have. One of those is the Exchange System Manager tools. There are ways and methods out there to getting this to work but most will involve uninstalling outlook and reinstalling after you have installed ESM tools.

I have been waiting for the ESM tools for Exchange 2010 to hopefully work with Exchange 2003 but that hasn’t happened either. Although I did find a really quick and easy solution this morning after reading the following posts on TechNet (Exchange System Manager for exchange 2003)

You will need to download the Exchange System Manager for Windows Vista then use something like WinRAR to extract the contents.

Finally open up a Command Prompt as Administrator. Browse to the directory that contains the ESMVISTA.MSI file. Run the following:

Once this is done you should be able to open the “Active Directory and Computers” and edit an Exchange User with all the required email tabs.

I have just finished upgrading my Mythtv setup to Ubuntu 9.10 and mostly everything still works (I upgraded from 8.10). Luckily the only thing that broke was lirc and it was the old config pointing at the incorrect /dev entry. The biggest problem was when I played video from inside mythtv using mplayer the video locked up. It acted like it was paused, you could seek and the video would advance but it would never play.

After searching through forums and mailing lists I was unable to find an answer so I started looking into mplayer itself. If i used mplayer on it’s own while Mythtv was running the same problem would occur. If I exited Mythtv then mplayer functioned perfectly. I found a possible idea from the Ubuntu forums whereby someone else was having slight playback issues (no mention of Mythtv though).

The problem appears to be with the audio driver mplayer tries to use. On my system it comes up with an error about pulse (that is something to fix some other time). To fix this I told mplayer to use ALSA instead, and it worked!!

Alternatively you could just add